On Christmas day, 1914, German and British troops entrenched merely yards from each other joined in singing Carols, remembering their friends and families back in their home towns. In some areas this went further and an informal truce was created. The two sides laid down their guns and came out of their trenches and swapped pictures, chocolate, clothes and stories with each other. Friendly games of soccer broke out. The men refused to take up arms against each other until their commanding officers forced the troops to move to different trenches in order to recommence hostilities.

This beer celebrates the human desire for humanity and peace. We wanted to craft a winter ale around the Christmas theme, so infused it with cinnamon and nutmeg to create a “mulled beer” suitable for drinking in a cozy 16th Century pub “snug” next to an open fire.

​Tasting Notes: This Spiced Winter Ale is based on an Old Ale. Then it is infused with Cinnamon and Nutmeg just before the end of the boil to create the subtle spiced flavors. 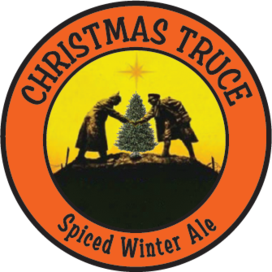