'Fearless and always eager for a challenge'. Douglas Bader was one of the Royal Air Force's most famous and decorated fighter pilots during World War II despite having lost both legs in an aircraft accident in 1931. After scoring many victories including over Dunkirk and taking part in the Battle of Britain he was caught and sent to the Prisoner of War camp at Colditz Castle before being liberated in 1945. This IPA is to honor Douglas Bader’s spirit and is a full blooded British IPA, strong with British Malts and tons of Kentish hops that deliver a strong punch.

​Tasting Notes: Strong malt with bread/biscuit notes and light toffee-like sweetness.  Medium yet pronounced dry fruity hop  which has a lingering, yet not harsh bittering aftertaste. 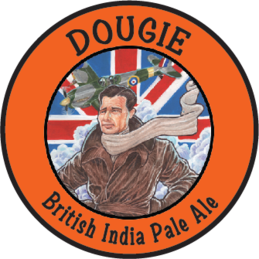