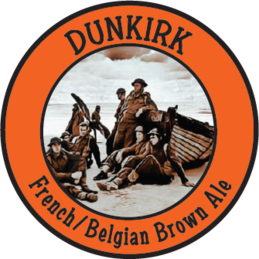 Dunkirk is a port town in northern France, right on the border of Belgium.  It was on the beaches of this area where nearly 400,000 British and Allied troops were surrounded by German Panzer divisions in 1940.  Defeat was imminent.  Then a ragtag flotilla of 800 small private boats assisted with the ferrying of troops back to the UK while being strafed by the Luftwaffe until the RAF drove them off and nearly 90% of the troops were saved.

​Tasting Notes: Dunkirk is a classic in the style of a French/Belgium brown ale.  Soft warm bready malt with fruity esters and a very low, noble hop flavor and lightly spiced.