Mad Jack Churchill was conceived when browsing the malts at our local brew shop.  The peat smoked malt caught the attention and it was an opportunity too good to miss.  This Scottish ale is a huge beer, sweet and peaty with very low hop character in the traditional style. Those that like this style will love this beer as it is as huge and crazy as is the hero it is named after.  Mad Jack was a WW2 officer who insisted on taking his Scottish double handed sword, bagpipes and longbow into every battle.  He had the only confirmed kill to a longbow arrow in the entire war and escaped the evacuation of Dunkirk by playing his bagpipes on the beach.  The enemy didn’t shoot him because they believed he was mad. 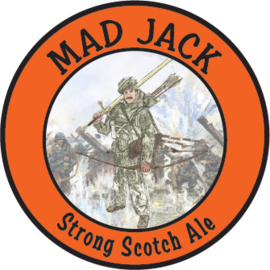