Queen Bea commemorates an Iceni warrior queen, who is revered as an icon representing the power and might of the British nation.  She lived in and around Norfolk, England in the first century AD. When her husband died the Romans annexed her lands against their agreement and she was reportedly flogged and her daughters raped. In response, she amassed an army of 100,000 Britons and they marched on London razing everything in their path and the Romans fled before her marauding army.  Queen Boadicea came to represent the British spirit in Victorian times and we are blessed to have this strong female role-model as a national hero.  We created this ale to be a blonde to represent the influence of her Celtic heritage and also through the use of a single British hop varietal called, coincidentally, Boadicea; a strong old world hop.

​Tasting Notes: This Norfolk Blonde Ale’s malt has a nice light grainy taste, textured with a pleasant toasty complexity and complimented by rounded grassy and floral notes from the hops. 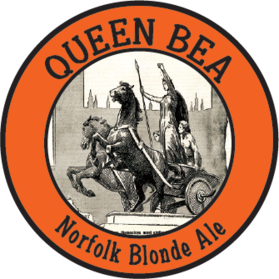