Communication during WWII was vital and there are many well documented stories of extraordinary bravery in this field including code breaking that have become legendary. Spy rings, the Enigma machine, Bletchley Park – featured in the “Imitation game” movie. However, the front line information transfer was so vital and carried out by regular troops, the signalmen. My father-in-law, Raymond Walter Witham Simkins, was one such individual, a visual signalman whose main role was to pass information from his vessel, a North Sea Minesweeper, #1090, to other shipping and his senior officers. This beer has been fashioned after his favorite tipple during this period (and after) as a tribute to him and the rest of the “ordinary” signalmen who played such an important role in helping defeat the axis of evil wherever they may lurk. We tip our hats to your unsung songs of personal duty in support of our nation’s freedom.​ 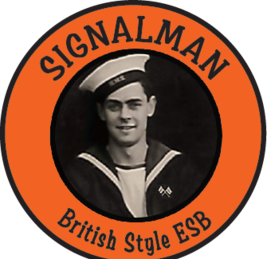