Using only New Zealand Nelson Sauvin hops we recognize Admiral Horatio Nelson in this Southern Hemisphere IPA. In one of the most decisive naval battles in history, a British fleet under Lord Nelson defeated a combined French and Spanish fleet at the Battle of Trafalgar in 1805, fought off the coast of Spain and ensured Britain's protection from invasion for the remainder of the Napoleonic Wars under the leadership of Napoleon Bonaparte. 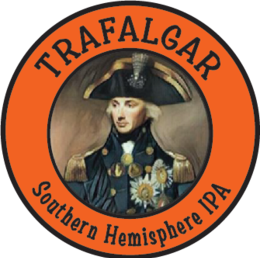