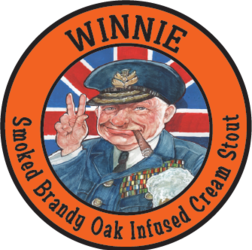 Sir Winston Churchill was the British Prime Minister and leader of the UK parliament through World War II.  Through his determined character and charismatic speeches he was able to help the United Kingdom rally against the onslaught of the Nazis for the first five years of the war before successfully recruiting the United States to help end the war both in the European and Pacific theatres.  He was affectionately represented as the iconic British Bulldog from which our brewery is named.

This unusual and non-conforming ale was crafted to symbolize three of his most poignant characteristics: The cream stout was chosen to represent his smooth elegant speeches; smoked peat malt was used to remind us of his love of cigars; and brandy infused oak to represent his love of a fine cognac. Although not know for drinking beer, we hope he would have approved.

​Tasting Notes: This is a unique ale; a smoked and brandy infused oak cream stout.